It’s always exciting around the winter season when it’s time to break out the snowboards and get ready to hit the slopes – be it freestyling at the park or some serious maneuvers at the backcountry. However, the number one thing to keep in mind and to ensure that you are well prepared for the fun adventure ahead – your snowboard needs to also be properly prepared for the action.

Waxing is an important practice to ensure your snowboard performs smoothly and fast. It does this by smoothening any rough surface on the snowboard leaving only aa thin water surface between the snow and the board. However, for this superb friction free mechanism, you must invest in a very good quality wax.

Listed below are the 6 best snowboard wax kits in 2022 – each outlining how effectively they work and why they should be a constant addition to your winter activity shopping list. 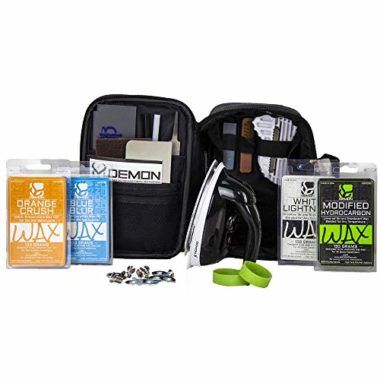 Additional to a smooth performance finish, this wax tune kit also guarantees a spotless new look and a great smell to your snowboard.  The travel-friendly iron included in the kit on the other end features adjustable temperature options with dual 110/220 voltage – so you can use it anywhere in the world. 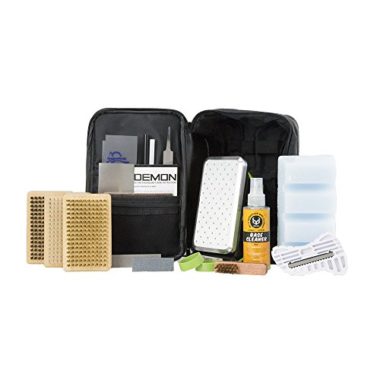 As the name suggests, the Demon Hyper Speed guarantees base cleaning, edge bevel, and wax in no time. This snowboarding wax tune kit features a rectangular iron with quick temperature adjustability for articulated tuning. The metal scraper and edge file include work effortlessly for impeccable tuning options whilst the choice of 3 wax removable brushes renew and open up base pores form your snowboard base.

The cool and crispy smelling citrus base cleaner on the other end provides your snowboard and skis with a final clean finish and memorable yet refreshing scent. Additionally, the choice of wax on this ski and snowboard tune kit is scented and blended for use in any riding condition. 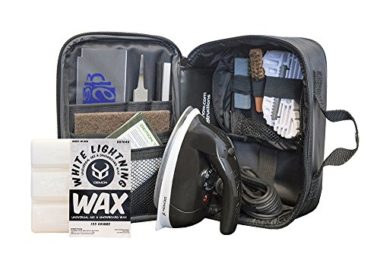 The RaceWax complete is a top-rated snowboard tuning kit – providing a durable and long-lasting solution for you and your big family. The edge tool on this powerful snowboard wax and edge kit work on up to 20 angles for both base and side. And if you doubt your angles, use the edge tool to determine them whilst the included 70mm diamond stone delivers fine edge honing without metal removal.

Furthermore, this snowboard tune kit boats a wax iron fabricated with a double-thick baseplate which is dimpled and grooved for guaranteed even wax distribution. Plus, the 120v ironworks under a reasonable wattage of 1000 and is fitted with a heat adjustability knob with a range of 176 to 338 degrees Fahrenheit. 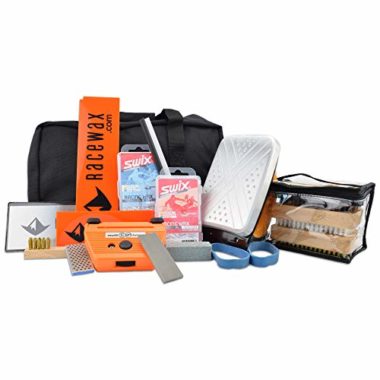 The RaceWax complete is a top-rated snowboard tuning kit – providing a durable and long-lasting solution for you and your big family. The edge tool on this powerful snowboard wax and edge kit work on up to 20 angles for both base and side. And if you doubt your angles, use the edge tool to determine them whilst the included 70mm diamond stone delivers fine edge honing without metal removal.

Furthermore, this snowboard hot wax tune kit boats a wax iron fabricated with a double-thick baseplate which is dimpled and grooved for guaranteed even wax distribution. Plus, the 120v ironworks under a reasonable wattage of 1000 and is fitted with a heat adjustability knob with a range of 176 to 338 degrees Fahrenheit. 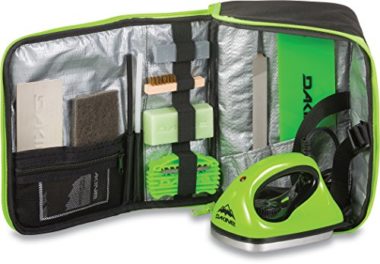 The Dakine Super Tune's large and multi-pocket bag offers a secure, convenient and space-saving storage option for the waxing kit – making it easy for you to move around with and use anywhere. These snowboard waxing kits with iron offer an excellent basic starter kit for a quick fix and come with all the essentials needed – an edge tuner, 10” file, wire file cleaning brush, metal scraper, 10” wax scraper, pocket stone, and Ptex.

The all-temperature wax octane bas also offer a great starting point and are typically ideal for use on an occasion with varying temperature conditions. However, for a full and long term waxing job, it is wise to invest in extra wax supply. 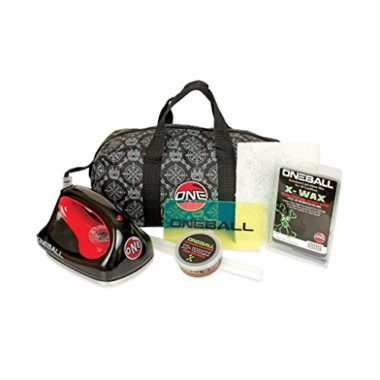 If you are looking for one of the best wax kits to ensure your ski and snowboard are powder ready for your next ski resort trip – the One Ball Jay is your solution. This cheap snowboard wax tune kit is equipped with a dependable 110V iron with temperature adjustability of between 212 degrees Fahrenheit and 320 degrees Fahrenheit.

Furthermore, the broadened base on the iron enhances the iron's effortless and quick tuning whilst the 130 fluorinated wax bar works wonders to produce a smooth, high functioning snowboard. With just a few bucks spent on a metal scraper and edge tuner for this inexpensive tuning kit, the snowboards and skis used on your trip are guaranteed cost-effective and high-quality tuning jobs.

View More By One Ball Jay »

How To Choose The Best Snowboard Wax Kit – Buying Guide 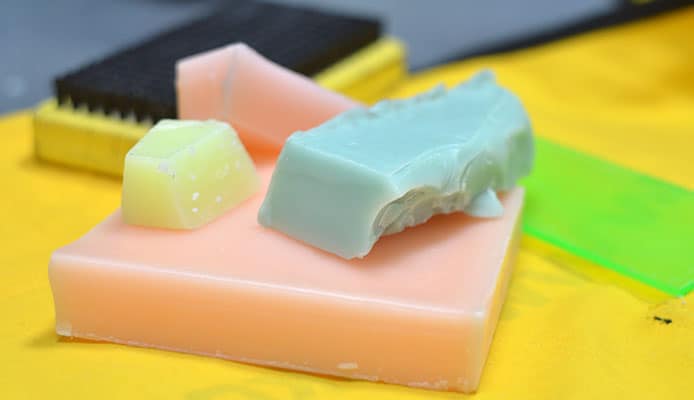 Waxing is incorporated as the last step to effectively tune your snowboard and skis. This is normally after a detailed base repair and smoothening of the edges. Waxing your snowboard helps to give it a smooth glide on snow. When choosing the best snowboard wax kits – it is very important to know the type of wax you are looking for.

The best snowboard wax kit is relatively easy and clear to use – once you know the basics of waxing and tuning your snowboard and skis. if you are doing a basic waxing job to allow you to hit the powder, it shouldn’t be difficult to do it. However, more detailed work takes some practice to perfect. The best snowboard wax kit also comes with detailed instruction manuals that make the process a lot easier for you.

Some of the best snowboard wax kits feature a safe construction and come with environmentally friendly waxes, with minimal to no added chemicals – so even when they are absorbed into the water bed, they do not contaminate the ground or water supply.

The best snowboard tuning kits come with multi-angled edge tuners. Unlike, the majority of ones with 90/88 angles, these feature multi-angle abilities with up to 20 side and base angles for more detailed tuning.

The best snowboard wax kits come with multiple pieces to complement the job of the kit. Especially for beginners, go for such kits to make it a lot easier for you. Components such as metal and wax scrapers, for example, go a long way to articulate and make the tuning job more effective. 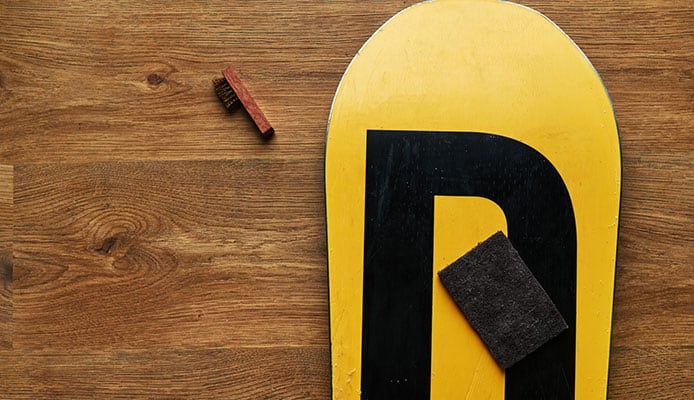 Q: Why Do I Need To Wax My Snowboard?

Waxing your snowboard increases its durability as well as its performance on snow. The waxing process helps to hydrate the base of your board and stops P-tex base pores from drying up. This, in turn, creates an effective thin layer of water between your board and snow, whilst avoiding any snow build-up and coating on your snowboard.

This, in turn, makes riding smooth, fast and effortless thus, preventing time wasted on trying to unstrap and remove constantly trapped snowboards. Additionally, the process also offers a layer of protection to your snowboard.

Q: When To Wax My Snowboard?

When newly purchased, snowboards come pre-waxed from the manufacturer. It is only wise to b aware of the nature of the waxing and impending details before usage to ensure maximum performance and proper durability maintenance.

The majority of snowboard manufacturers recommend a wax job for your snowboard after every 5 days of riding. By doing so, this guarantees that your snowboard will maintain the same outstanding smooth glides on the snow. Additionally, when waxing, try to give your snowboard more than one layer of waxing to ensure effectiveness.

Even after the winter season, before storing your snowboard until the next season – it is highly recommended that you wax it to ensure proper preservation and durability. Then, when you are ready for the next season to be sure to de-wax and apply appropriate waxing and tuning for that specific season before you return to the slopes

Q: How To Wax My Snowboard?

Above your snowboard, press the wax on your kit’s heated iron. The wax should smoothly melt and drizzle over from the iron to your snowboard. During the wax melting process, ensure the iron’s heat is not too high that when the wax touches the iron’s surface, it begins to smoke.

Contour the edges of your snowboard with the liquid wax droplets – ensuring you are covering the whole length of the snowboard. Try to keep the contoured lines not more than a centimeter wide so you have just the right amount of wax.

When you circle back to the starting point of your line on your snowboard, press down the iron on that surface and start ironing back and forth. Push in the wax as you are spreading it. The harder you press in, the more effective it will drip and settle into the P-tex base pores.

Whilst you are spreading the wax, always feel underneath your snowboard to ensure it doesn't get hot (it can be warm). If the whole underside feels warm, this means that you have fully waxed the current side, thus, you can flip over the board and repeat the step with the opposite side.

However, make sure each part of the snowboard is fully covered. You can do this by repeating the dip lining process at least once or twice. Then, evenly spread the wax with the iron to fully cover all areas of the center part of the snowboard. Just like the first step, make sure the opposite side is warm and repeat the same step for the opposite side.

Do not forget to wax the tip and tail of your snowboard. However, do the waxing at minimal for these two parts. This is because when you are riding your snowboard, you are less likely to scrape them unlike the middle part – this means that your tips and tails are less likely to wear and thus, they need fewer layers of protection. With thick waxing, you risk debris and wax build up making the board look unkempt and somewhat a little heavier.

For that finishing touch, let your board rest for at least 30 minutes (if you are in a hurry) or overnight. This allows the wax on your snowboard to dry and fully seep into the P-tex base pores. And after this, the next step is to hit the slopes. Use the snowboard for up to 5 riding days then repeat the steps above to maintain consistency on performance and durability.

The snowboard tune kit reviews deliver sound knowledge on how to take care of your snowboard and ensuring they perform to their maximum potentials whilst also guiding you to finding the best snowboard wax kit for your needs.

The buying guide also outlines what to look for to best adapt to your needs and environment to which you will be riding over the winter season – be it you are a beginner or Pro. The list of the 6 best snowboard wax kits above also offers a solution to all riders – no matter the preference. So the rest is up to you – simply pick what works for you and get ready for that action-packed snowboarding experience. 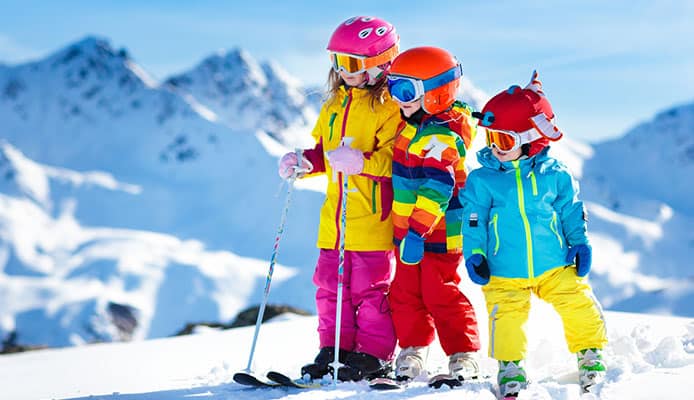 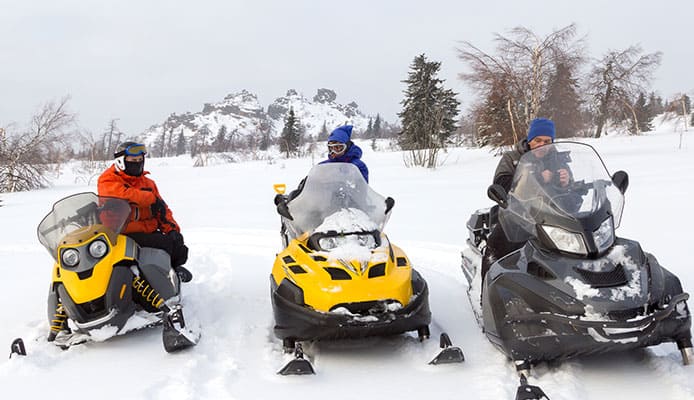 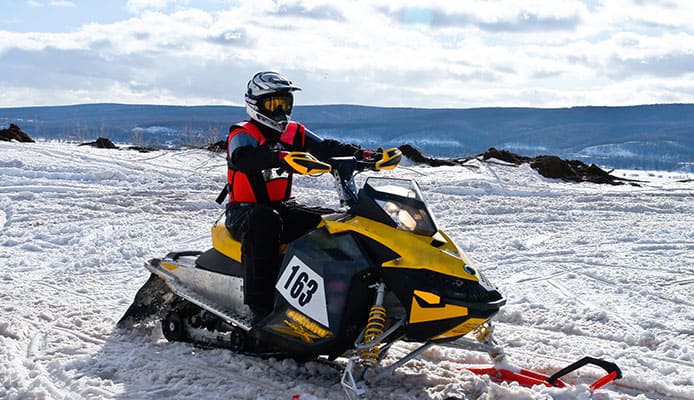