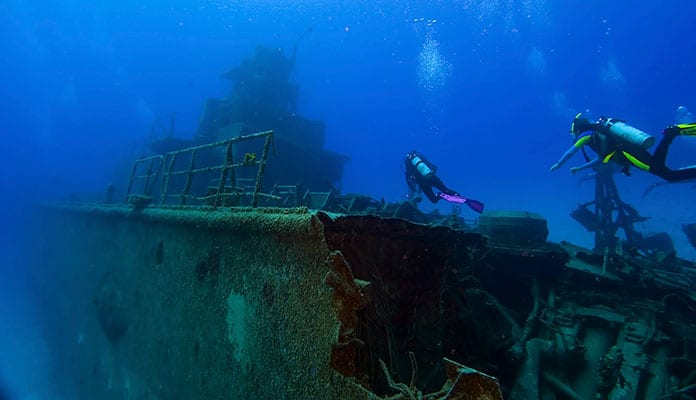 One of the most amazing diving experiences is swimming through a shipwreck. Shipwreck diving is different than a regular scuba dive. Entering the water and the wreck slowly becoming visible as you descend is something everyone should experience. Seeing a ship that was once on the surface is a sight to behold.

Once these vessels settle on the bottom of the ocean they become habitats for fish. They slowly become an artificial reef that houses a vast variety of species of fish.

Since you are in a confined area you need to be aware that these can be technical dives. Most locations require you to have completed a special PADI shipwreck course before entering these vessels. This course gives you the knowledge you need to safely dive into this environment. We strongly recommend it as it usually includes at least one or two dives in shipwrecks.

Ready to get started? Let’s go!

This vessel was intentionally sunk off the coast of the island of Grand Cayman. It sits in waters that are warm enough that you don’t even have to wear a wetsuit. It is a relatively new shipwreck which means there isn’t a ton of coral build up. This means you can fully swim through the portholes and even venture below the deck. In fact, this ship has five levels that you can explore, depending on your certification.

This shipwreck has a history straight out of a movie. It used to be a Greenpeace ship that was bombed by two French secret agents. In 1987 it was turned into a diveable shipwreck that now houses tons of fish. This is widely regarded as one of the best dive sites in the entire world.

One of the best adventurous underwater dives you will ever do lies off the coast of Newfoundland in Canada. This area, Bell Island, was attacked by Germans during World War II. In 1942 more than 60 men lost their life followed by dual raids of the island that resulted in the sinking of 4 ore carriers and a wharf. This site is very popular as it one of the only World War II wrecks in North America. Largely still intact you can see where artifacts actually were before the ship went down. Rifles can still be found laying on the deck, the ammunition still has a shiny brass color and the toilet seat is still sitting up.

This is not your typical shipwreck. You may not even be able to get to this one. It is a 240-year-old merchant ship (17th century) that sank in the Gulf of Finland. If you do get the chance to dive this ship you will not be able to enter or touch it in any way. Even getting to this ship may be difficult since the team that found this ship hasn’t released it due to the fragility of the ship. With that being said, many World War II ships also draw people to this area.

This site features an old quarry that was flooded in 1996 and turned into a diving center in 2003. There is stuff to see from 20 feet (6 meters) deep to 249 feet (76 meters). One of the deeper attractions is a sunken plane that has been gutted specifically for scuba diving. If that doesn’t interest you there is also a Royal Navy Wessex Helicopter Mk3, a British Aerospace Jetstream 200, a Landrover, and even a gnome garden. You can get PADI and IANTD training at this site as well.

If you are looking for a world-class dive site that has warm crystal clear waters, tons of marine life, and an adrenaline-rushing shipwreck to explore then Sri Lanka is the place to go. Just off the east coast of Sri Lanka, you will find the Royal Navy Aircraft Carrier HMS Hermes. This was the first ship to ever be used as an aircraft carrier. Built shortly after the first world war this boat was used largely during the second world war. This British ship was sitting in waters just outside of Sri Lanka when the Japanese Navy was ordered to carry out attacks in March of 1942. HMS Hermes was under full attack by more than 80 Japanese Zero fighter bombs that attacked and sunk the ship in less than an hour. In this time, 308 people went down with this ship.

Due to a civil war within the country between 1983 and 2009, this wreck had not been explored by divers. With less than 10 years of exploration, this wreck remains uniquely intact. You can enjoy exceptional water clarity which will give you an amazing view of tuna, grouper, and jack.

One year before the sinking of the Titanic The Yongala, Australia’s largest shipwrecks, sank. Located off the coast of Queensland within the famous Great Barrier Reef Marine Park, this shipwreck remains incredibly intact. Sinking because of a cyclone, this shipwreck took the lives of 122 people. Diving this wreck you can expect warm water with the exceptional water clarity.

You are almost guaranteed to see some of the coolest sea life you have ever experienced on this dive. From manta rays, octopuses, turtles, many different sea snakes as well as an abundance of beautiful and colorful corals. For those that enjoy swimming with sharks, you will likely come across both bull sharks and tiger sharks while diving this wreck.

For those who have tried scuba diving before, you know how much exploring there is to do under the ocean surface. Diving a shipwreck can be a life-changing experience. You will want to bring along your underwater camera as you will likely be mesmerized by all the life that has formed around these old metal boats.