If you are looking for a way to stay fit and healthy from the comfort of your home or office, an exercise bike is a good investment. The best exercise bikes offer an efficient and convenient way to lose body fat and burn calories whilst also strengthening your heart, lungs, and muscles.

The best part about working out using an exercise bike is that you don’t have to strain your joints; making them great for anyone. Exercise and stationary bikes are also designed with improved adjustability to allow you to achieve a personalized fit for a comfortable workout. Plus, their compact build offers easy and convenient storage.

Below is the list of the 10 best exercise bikes – choose your ideal option so you can stay fit and healthy, no matter where you are. 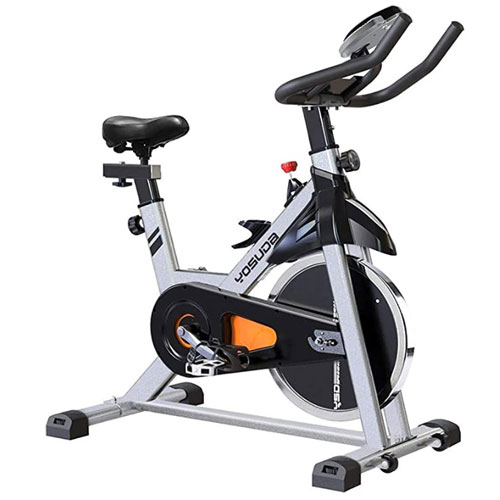 Built with a 35 lb. flywheel, the Yosuda Indoor exercise bike mimics the performance of a real road bike to give you an adequate workout.

The home spin bike's flywheel momentum allows it to spin steadily and securely. In fact, it accommodates a rider who weighs up to 270 lbs. and allows them to perform intense aerobics with the ultimate comfortability and stability.

Measuring 10 inches long by 8.6 inches wide by 2.3 inches high, the bike’s ergonomically designed seat can be adjusted to give a customized fit. The 4 way adjustability includes forward and back adjustments as well as height adjustments between 25 inches to 35 inches tall. You can also adjust the handlebar with a two way mechanism, i.e. up and down. 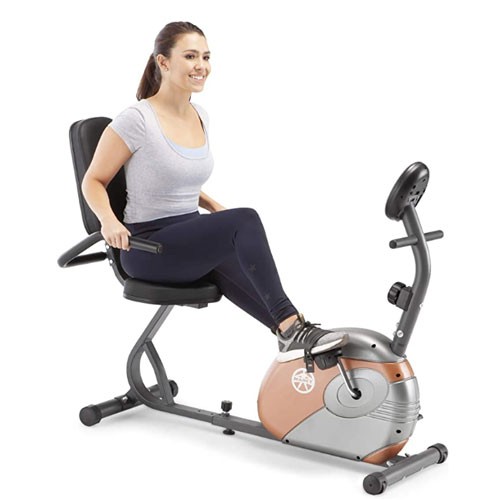 Fitted with an LCD computer display, the Marcy Recumbent exercise bike allows you to easily track your progress thanks to its clear time, speed, distance, calories, and odometer display.

This top rated stationary bike features a compact build, thus, taking up very little space in your living area. So, if you have a smaller home or apartment, this exercise bike is an excellent choice. Its magnetic adjustable resistance on the other end offers excellent momentum to increase your body's cardiovascular endurance as well as to help burn calories.

The bike is even fitted with a convenient resistance knob under the handlebars so you can set up to 8 levels of workout resistance. At the bottom, the exercise bike is fitted with large textured pedals with safety grips and straps to prevent your feet from slipping during workouts.

The exercise bike is fitted with an adjustable foam padded seat to achieve optimal comfort. Its contoured foam padded handles also provide added comfort and support for your arms and back. To improve your comfort whilst seated, the bike also allows you to adjust its inseam height between 27 and 36 inches. 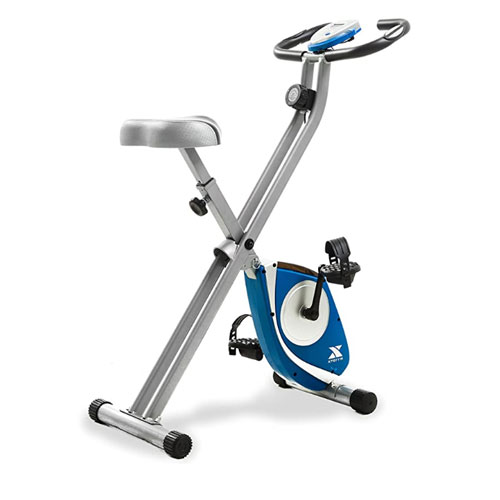 The XTerra Fitness FB150 Upright exercise bike folds down to just 18.1 by 18.1 inches to allow for easy and convenient storage in your home.

The workout bike features an intuitive design with pulse grip handlebars, thus, allowing you to closely monitor your heart rate during workouts. The padded handlebars also offer comfort and support to allow you to work out for longer without any back or muscle pain.

Its solid X-frame design with thick steel tubing on the other end improves the bike’s stability whilst its belt drive system delivers noiseless and effortless operation. At the bottom, the bike for indoor work out is fitted with a 3-piece pedal crank and adjustable strapped pedals for improved durability and secure non-slip fit, respectively.

The bike is also fitted with an anatomically large seat to provide proper and comfortable coverage. Measuring, 31.89 inches long by 18.1 inches wide by 43.3 inches high when opened, the bike comfortably accommodates users who are 4 feet 10 inches to 5 feet 10 inches tall. 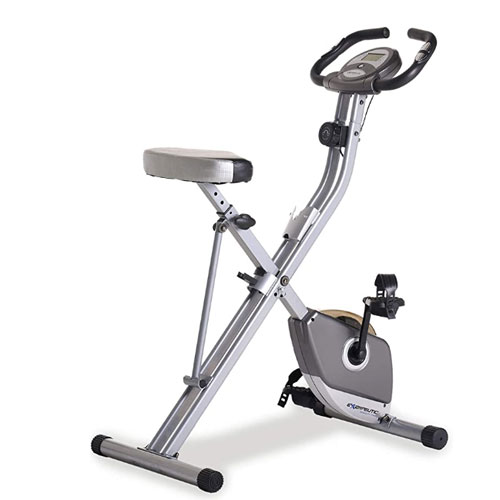 Featuring a unique step-through design, the exercise bike for home is very easy to mount and dismount. Its double-drive transmission system and balanced flywheel design on the other end provide quiet and easy operation. With its quiet operation, you can still enjoy your favorite morning show on TV whilst sneaking in your daily work out.

At the bottom, the exercise bike is fitted with wide pedals for a secure and comfortable fit. The leg stabilizers on the base of the bike help to prevent unwanted movement and tipping over, even during the most intense workouts. 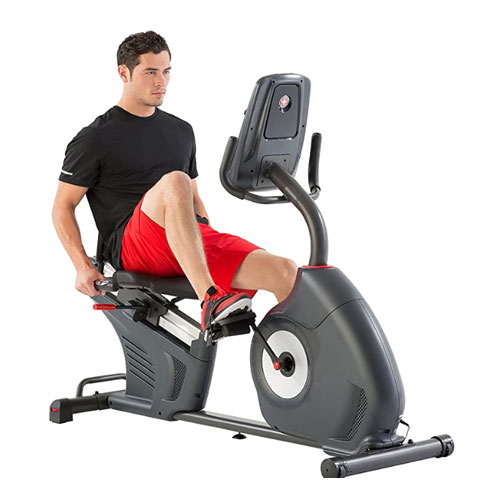 Integrating Bluetooth connectivity, the Schwinn Recumbent 270 exercise bike allows you to sync it with your Schwinn Trainer app for fitness tracking.

These stationary bicycles also sync with a free RideSocial app which allows you to virtually ride in the outdoors with your friends. If you are in search of a bike that offers versatile workout options, then, this is a perfect choice as it offers you up to 29 programs, 12 profiles, 9 heart control options, and 2 fitness tests.

The bike is also built with up to 25 levels of resistance for a wider selection of work out intensity options. Its high speed and inertia drive system on the other end comes with a perimeter weighted flywheel for easy and smooth operation.

Measuring 64 inches long by 27.7 inches wide by 49.9 inches high, the bike for home use boasts a wider user height compatibility of between 4 feet 10 inches to 6 feet 1 inch tall. Weighing 86 lbs., the bike also supports a weight capacity of up to 300 lbs. 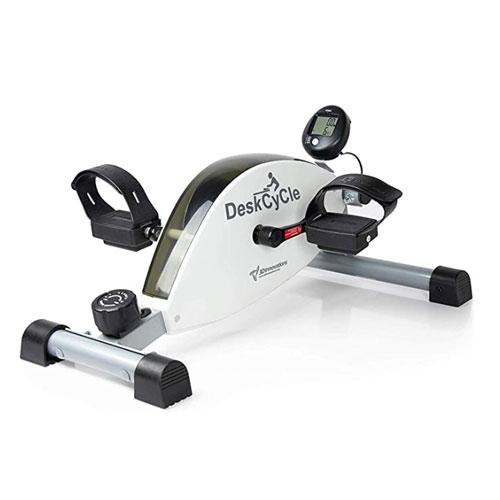 Designed with a low profile, the DeskCycle Under Desk exercise bike allows you to work out from anywhere, whether you are on your living room sofa or working late at the office.

Featuring a compact design and easy set up, the stationary bike for home and office use can be used anywhere. The patented magnetic resistance mechanism on the other end delivers a smooth and quiet bi-directional pedal motion.

The pedals are even fitted with adjustable Velcro straps to keep your feet in place. With this bike, you can still enjoy up to 8 calibrated resistance settings for different work out intensities. Its LCD display on the other end allows you to track speed, time, distance, calories and distance traveled.

The bike’s design allows it to fit under desks that are as low as 27 inches. You can even fit the exercise bike in front of furniture such as your sofa or office chair with ease. Weighing only 23 lbs., it is also easy to transport and move. 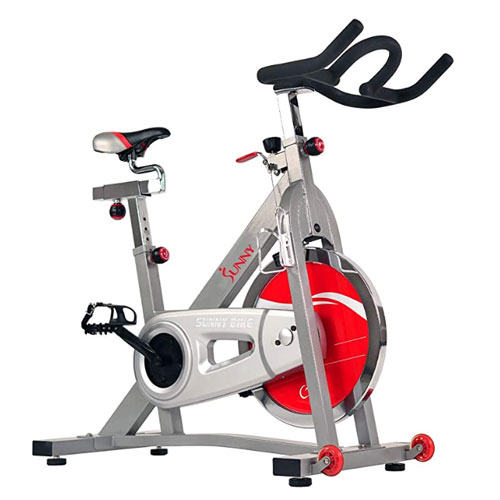 Levers fitted at the bottom of the Sunny Health & Fitness Indoor Pro exercise bike, help to prevent wobbling and jerk during workouts. You can even adjust the base levers to improve the stability on uneven surfaces.

These top exercise bikes are built with a 40 lb. chrome flywheel that delivers superior momentum for effective cardio workouts. The heavy flywheel also improves speed, stability, and consistency throughout your work out sessions. To switch up the work out intensity, simply twist the easily accessible tension knob.

The home spin bike measures 46.5 inches long by 18 inches wide by 46 inches high, yet, it is designed to allow adjustability to provide a personalized fit. The bike has a wider inseam height range between 29 inches to 41 inches whilst its handlebar-to-seat length ranges from 17.5 to 22 inches. 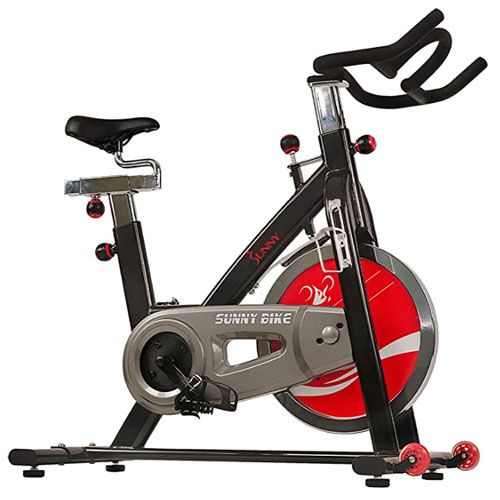 Constructed with a maintenance-free belt drive system, the Sunny Health & Fitness Indoor SF-B1002 exercise bike delivers a smooth and quiet ride without interrupting anyone in your household.

The indoor bike’s 49 lb. solid chromed flywheel improves the bike's stability whilst the felt pads offer effortless pressure resistance adjustability. The flywheel build also allows the bike to offer more momentum for effective cardio workouts. During your workouts, you can stay hydrated thanks to the conveniently fitted water bottle holder. 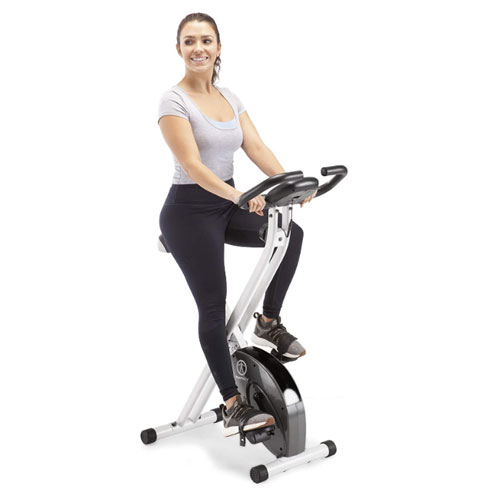 The home exercise bike is built with a standard LCD computer display which allows you to track five key functions. These include the speed, time, distance, calories, and total distance covered. You can also use the scan mode to view the functions with different metric values. Its intuitive tension knob on the other end allows you to choose up to 8 preset resistance levels to suit your work out needs. 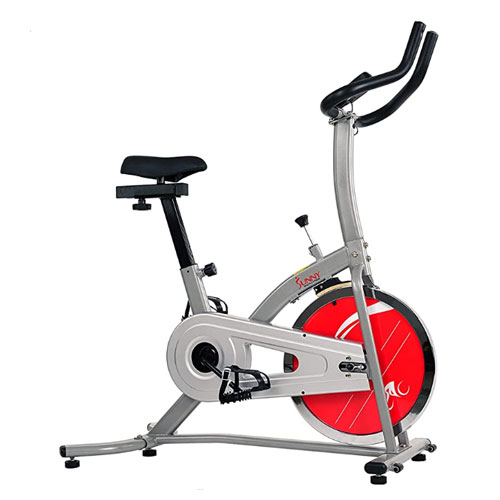 The chain belt system design of this bicycle for exercises makes it easier to operate its 22 lb. flywheel thus, delivering more momentum and work out resistance. Whilst offering high inertia and resistance, the indoor professional exercise bike still maintains superior comfort thanks to the wide padded seat and rubber foam paddle handles. At the bottom, the cage pedals offer a secure fit and prevent your feet from slipping.

To give you a perfect fit, the padded seat is also designed with a 4 way adjustability. Weighing 62.5 lbs., it can also support riders who weigh up to 220 lbs. and are between 5 feet 1 inch and 6 feet 3 inches tall.

How To Choose An Exercise Bike – Buying Guide 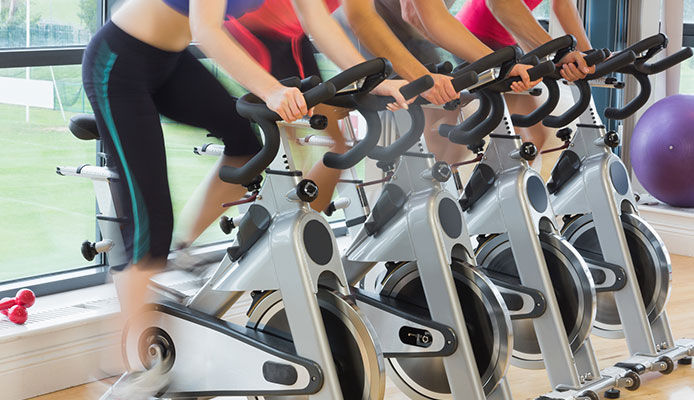 Resistance is an important factor to consider when choosing the best stationary bikes. Resistance is the feature that gives you stationary bike its exercise component. There are four common bike resistance types, namely, a flywheel based, friction, magnetic, and a lesser known fan-based resistance.

A flywheel is a heavy mechanical disk at the front side of your bike that is used to store rotational energy. Similar to a road bike, a flywheel (which mimics the front wheel) is connected by a belt or chain to the pedals.

So when you ride, the pedaling power or momentum generated, in the form of rotational energy, is stored in the flywheel. The heavy build of the flywheel is what creates the resistance when pedaling thus, giving your body a workout.

This is what gives your body a workout. Additionally, whilst friction resistance is basic and normally needs you to manually adjust it, magnetic resistance can be operated via internal bike computers.

Fan based resistance operates without the use of flywheels. A fan is fitted to the bike in place of a flywheel. Thus, the resistance for these types of bikes is created by the air that is being blown. The fan is connected to the bike’s pedal using a pulley system and a belt to allow you to counter the resistance.

Similar to bike computers, pre-set programs give you an option to access a wide selection of work out programs, and track your performance. Bikes that come with pre-set programs are a little expensive but worth the investment. They can even keep you entertained with music during your workouts.

There are three types of exercise bikes. These include upright, recumbent, and indoor cycling bikes. Upright bikes have a similar design to regular bikes and normally require you to ride upright whilst your body is slightly tilted forward. Their handles are slightly higher than regular bikes, however. Recumbent bikes on the other end are lower in height and normally require you to sit in a back leaning position.

They come with padded seats and backrests to make them ideal for longer workouts without causing back, neck, or muscle pain. Indoor cycling bikes, also known as spin bikes are designed for intense workouts. They closely function as if you are riding a regular bike. The difference is that you are indoors and immobile. 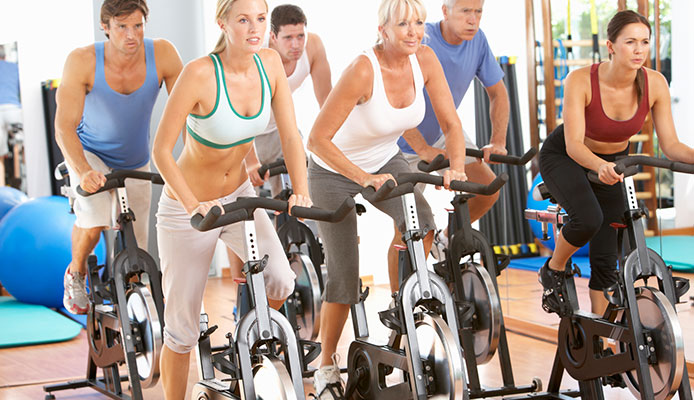 Q: Can You Lose Belly Fat By Riding A Stationary Bike?

Q: Are Stationary Bikes Worth It?

Q: Is There A Better Bike Than Peloton?

The best stationary bikes give you the convenience and efficiency to stay fit and healthy from the comfort of your home. On those cold winter days or rainy days, you can substitute your mountain bike for an exercise bike and still be able to give your body a substantial work out. So keep your body fit and healthy by choosing your favorite option from the 10 best exercise bike reviews above.