The Best Cast Irons For Camping

Camping is an excellent way to relax and to get away from the hustles and bustles of the city. It’s also way to get in touch with nature – take in the fresh air of the wilderness, eat fresh, trek the nearest trail, just to mention a few.

Like many other occasions, the highlights of camping are when you prepare your fresh catches and enjoy it with your family or friends. And just because you are not at home, this doesn’t mean your cooking should be limited. Cast iron camping cookware is quite handy and eases the process of cooking in the outdoors so you can enjoy the same quality food.

Listed below are the 3 best cast irons for camping in 2022 that you should absolutely invest in.  They are versatile and offer just the convenience you need – simply pick the option that appeals most to you. 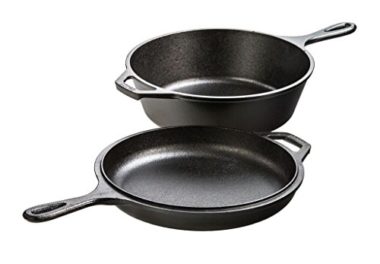 The Lodge Cooker Pre-seasoned cast iron for camping comes as a combo cooker with the ability to function as a deep skillet, a fryer and a Dutch oven. Additionally, the cast iron camping cookware come with a lid which allows doubling as a shallow skillet or griddle, thus, making it an excellent best cast iron for camping for all your cooking needs – whether you are pan frying Bass, making soup or even baking bread.

The 3.2 quart cast iron features Lodge’s patented pre-seasoning with 100% vegetable oil. The flavoring is thus natural and gets even better and better with every use whilst its heat retaining abilities ensures full and evened cooking every time. The strong and brutally tough iron construction on the other end allows the cast iron to be used on any heat source.

To prolong this cast iron camping sets’ quality and durability, wash the cast iron with mild soap, dry with a lint-free cloth, rub with a light layer of vegetable oil and using the loops at the end of the cast iron, hang it in a dry place.

Looking for a simple yet heavy-duty cookware for all your needs when camping? The AmazonBasics Pre-Seasoned cast iron for camping suits all your needs for sautéing, pan-frying, baking, broiling, and roasting. The pre-seasoned round shaped and flat based camping skillet boasts high heat retaining abilities and evenly heats up in literal minutes for expedited cooking.

With the ability to withstand heat up to 500 degrees Fahrenheit, the cast iron skillet for camping is safe on all heat sources including ovens.  The long handle and opposite helper handle provide a steady and secure hold whilst the long handle hole allows you to easily hang it on the wall. Plus, with an additional size range of 10.25” and 12”, you can simply choose what size suits your needs and gear packing space.

And when ready to serve, the skillet can safely be placed on an insulated table mat for easy serving so you don’t have to use so much cookware. The flared side edges and the seamless movement on the other end, makes it even easier to cook, serve and wash the cast iron skillet. 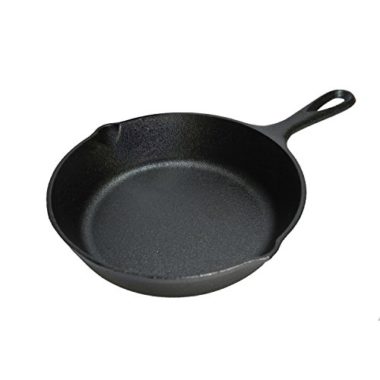 Suitably sized and priced, the Lodge Stovetop cast iron for camping is your go-to multipurpose camping cookware. The cast iron is fine tuned and ruggedly constructed then finish with a 100% vegetable oil pre seasoning making it the best cast iron skillet for camping. Plus, you can get that extra nutritional iron whether you are frying chicken, sautéing veggies or braising game meat.

The stylish black finish enhances heat retention and evenly cooks your food from the bottom through the side ways. Additionally, the cat iron also maximizes heat absorption into the food. The 6.5-inch cast iron comes with two handles for heavy lifting and two side lips for precise pouring as the non-sticky finish lets you simmer your soup all even long for an earthy pick me up.

This 6.5-inch skillet is small enough to fit a small family or a solo getaway in the wilderness. It packs well and quite easy even in your backpack. If you are looking for a larger cast iron size for camping for a larger group, the cast iron also comes in a larger size options.

How To Choose A Cast Iron For Camping – Buying Guide 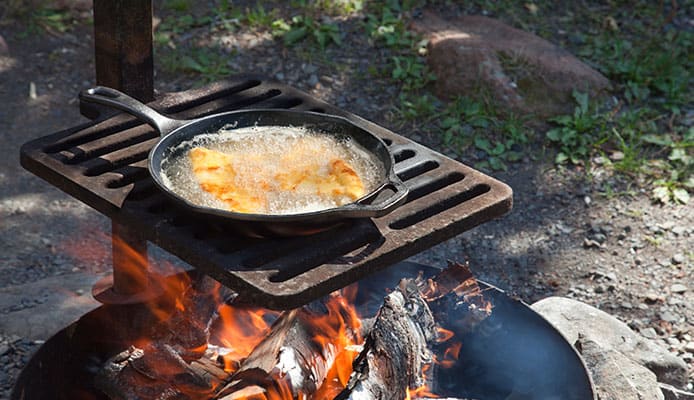 The best cast iron skillet for camping no longer incorporates chemical treatment in their construction. Seasoning is a concept used by many manufacturers to enhance quality and safety of their cast iron cookware.

Seasoning a cast iron simply means cooking oil o fat in it. The purpose of seasoning a cast iron to create a non-stick surface to prevent your food from sticking to the surface when cooking, no matter the temperature. Seasoning also helps to protect the cast iron from rusting, which would affect its quality and safety of your food.

Top rated cast iron skillet for camping come pre-seasoned because they eliminate the hassle of seasoning for you especially in limited space and resources such as when you are camping.  They also ensure that the cast iron is protected from rust.

However, if you find yourself in the outdoors with an unseasoned skillet, simply heat up the skillet till very hot, add oil and rub it all over the skillet. Remove the skillet from heat and let it cool. The Lodge brand recommends using vegetable oil, shortening or seasoning spray for maximum results.

Furthermore, even with pre-seasoned cast iron gear for camping, it is a great idea to re-season them after some use. The best way to do this at home is to first scrub the cast irons with hot soapy water, rinse and then dry thoroughly.

Then, spread a thin layer of melted shortening or vegetable oil over the skillet. Place the skillet upside down on the middle rack of the oven (line the lower part with aluminum foil or parchment paper to protect the oven) and bake for one hour at 375 degrees Fahrenheit. After an hour, switch off the oven and let the skillet dry in there. The skillet should be seasoned and ready for use.

The best cast iron camp pots, skillets, Dutch ovens and other sets are quite handy when camping. If you want a basic no too fancy, a simple cast iron skillet will do whilst if you  are thinking of a more lavish out of the way cooking, then a cast iron cooking sets for camping is a better choice.

However, some manufacturers make combo sets such as the Lodge combo set which can double as skillet, griddle, Dutch oven and fryer for all your camping cooking needs. The latter is perhaps the best option for either context – a smaller group or large, simple cooking or an array of choices.

Furthermore, cast iron skillets are favored for camping beccause they are chemical free and seasoned for a non-sticky surfaces which makes cooking easy, fast and safe. Despite their ability to be used for a range of cooking, cast irons are still known to be very durable and  thus, they can be used in any heat source efficiently- be it an oven, frill or camping fire.

Their construction also withstands the highest of temperature whilst being able to evenly distribute heat thus, ensuring food is evenly and fully cooked and in a reasonable time frame. As for the iron deficient individuals, cast irons are not chemical leaching however, they leach iron which enhances iron content in your food.

It is fairly easy to clean cast irons. Simply use a stiff brush and wash the cast iron under running water. Results are better when you wash the cast iron when it’s still warm. Avoid the use soap. However, if your cast iron is too stained or if you feel you need to absolutely use soap then, use mild soap with running water and smoothly scrub out the stains. Rinse with water then dry thoroughly with lint free cloth or paper towels.

Additionally, there are useful care tips to follow to ensure your cast iron is easier to clean and maintain. The first thing is to always know what kinds of food to avoid cooking in your cast irons. Acidic foods or example will damage the seasoning on your cast iron. This leads to the cast iron’s leaching of more iron thus, making your food taste metallic and adding rusting appearance which becomes cumbersome to clean and get rid of.

It’s also wise to apply an “express” season process before cooking with the cast iron each time. Simply apply vegetable oil to the surface, heat the oil over low heat until pan is hot. Discard the vegetable oil and continue cooking. Investing on small useful gadgets such as rust erasers to rub out rust on the spot also helps relieve the strain of collectively cleaning the build up when you are washing the cast iron. 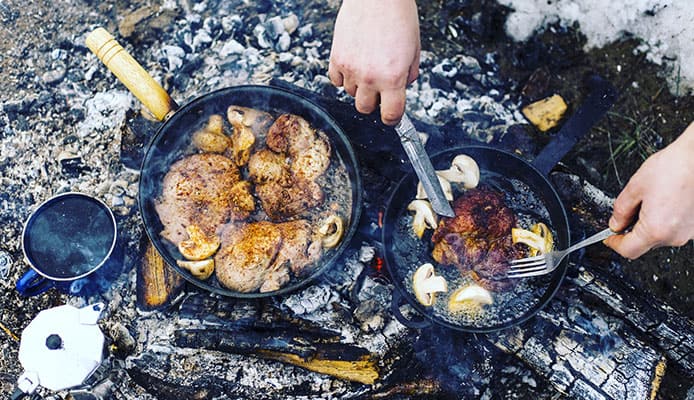 Q: Why Use A Cast Iron For Camping?

When properly seasoned, cast iron cookware is an excellent choice for camping. Cast iron is ideal because of its stiff and brittle construction which gives it the ability to evenly distribute heat this property in turns allows them to evenly and fully cook food.

The strong make of cast iron allows makes it able to still function even at high temperatures. This allows for cast iron skillet to be used in a range of heat sources be it an oven, grill, stove and even camping fire or on burning coal. This also gives cast iron a durable, high-quality and indestructible finish.

When effectively seasoned, cast iron is impressively “non-sticky” thus; food prepared comes out clean with sticking to the surface. And compared to other metal cook ware, seasoning prevents corrosion which is unsafe to your food.

Furthermore to easy cooking process with cast iron, it is also quite easy to care for and to clean. It literally takes a few minutes to express season cast iron and the process is still effortless even when you season it b baking at home. So at the camping grounds, all you have to do is heat up the skillet with oil on the surface let cool, then start cooking because your cast iron will have been pre-seasoned.

Plus, as mentioned before, many of the best cast iron for camping are pre-seasoned and ready for use. All you need to quickly clean your cast iron at the camp site is a brush and water. And as your cast iron is still warm, the cleaning process is just as effortless as a simple scrub and rinse.

Q: What Recipes Can I Make In A Cast Iron?

The best cast iron for camping can relatively make most recipes however; there are key foods to avoid cooking in a cast iron. Some of the common ones include;

However, for foods that can be cooked in cast irons, the best recipes are made. Due to their, heat retaining, distributing and strong make, the best cast iron skillet for camping make the best steaks, fillet non-delicate fish for a quick sear and bustling flavors, sauté crunchy and crispy vegetables or bake skillet bread. Some cast irons that come as a combo are also versatile in making recipes. A Dutch oven for example will let you make excellent stocks, sauces and soups.

The best cast iron for camping reviews provides excellent insight to these invaluable additions to your kitchen essentials. The buying guide on the other end adds value to your knowledge bank on what to look for in your cooking essentials to go with your ideal camping trip. Whether you are looking to invest in the best cast iron skillet for camping or even a combo set to save space and money, the list of the 3 best cast irons in 2022 above is a great place to look. 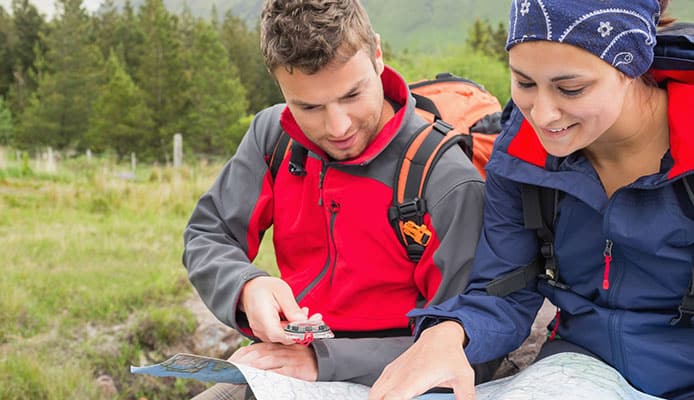 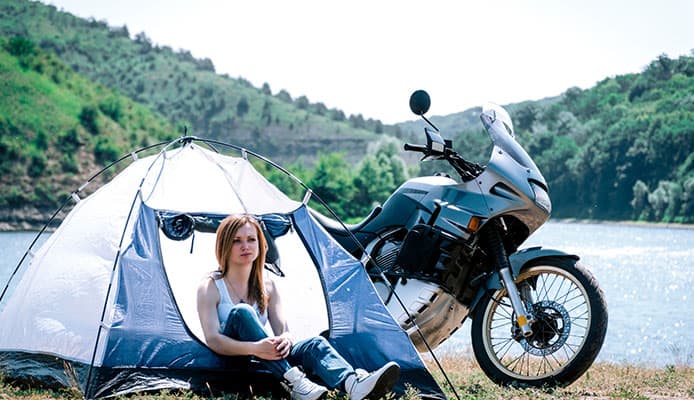 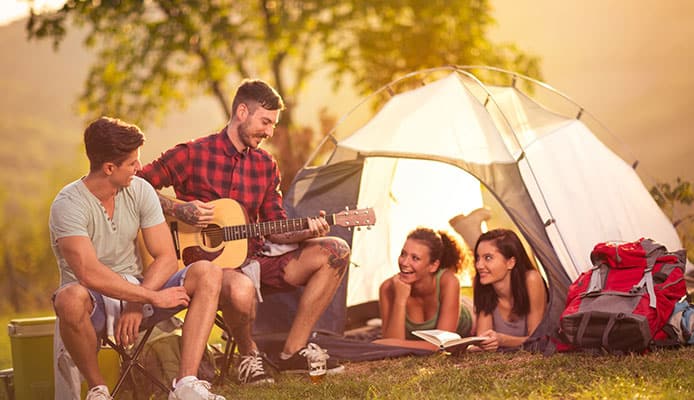