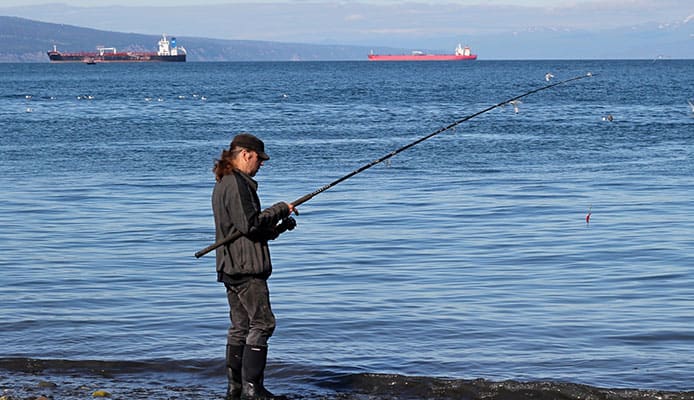 Gifted with a coastline that spans more than 34,000 miles, plus the many lakes and rivers around The Last Frontier, there is no doubt that Alaska is an excellent fishing destination. Whether you are a casual caster or an experienced angler, there is a place where you can try Alaska fishing.

Alaska is home to some of the biggest salmons and halibuts you can ever find. No wonder, it is dubbed by many as the Disneyland for fishing enthusiasts. Whether you would like to try ice fishing, night fishing, or trout fishing in a stream, among others, Alaska is sure to not disappoint.

It is a paradise for anglers. But where exactly should you go fishing in Alaska? If you have no idea, read on and we’ll help you plan your next fishing trip.

Considered as Alaskan pike fishing nirvana, it has a distinct allure that draws anglers from all over the world. It is especially popular for those who are looking for the best spot in Alaska for Northern Pike fishing. It is not surprising to catch a 30-pound pike, which is exactly the reason why people go to the Innoko River.

Pike is huge and is a fighting fish. Because of this, you need to be well-equipped with the right gear and knowledge of the right fishing techniques. Otherwise, it will be a frustrating trip.

One of the problems with fishing in the Innoko River is the difficulty of getting there. Accessibility can be an issue. The best way to reach the river is through a charter.

The Brooks Mountain Range is an extension of the Rocky Mountains in Northern Alaska. It stretches approximately 700 miles. For anglers, they come not for the land but the lake. Throughout the mountain range, several lakes promise plenty of fishing opportunities for their visitors.

Among others, the place is known for humungous lake trout. This may not be one of the top places to catch trout in the country, but in Alaska, this surely is on the top of the list. It is hard to not take home a catch because of the large number of trout in the area, which can also be attributed to the fact that the lake is untouched.

Talking about untouched, this is also in a remote location, which is best to reach through a chartered flight. June and July are the best months to go for an epic fishing adventure. If you are visiting during the spawning season, bears can be present, so don’t forget to bring a bear spray.

Running at a length of 82 miles, this is the longest river in Alaska’s Kenai Peninsula. It has excellent rapids, making it a great place to take your kayaks for a run. More than kayaking, this is also a popular spot for Alaska fishing.

The Kenai River also enjoys a reputation as the most popular sport fishing destination in Alaska. Runs of king salmon and pink salmon draw anglers here. In 1985, a 44-kilogram king salmon was caught at the Kenai River. So, be sure to familiarize yourself with the essential salmon fishing tips before you go! You might end up being lucky to catch a big one!

Located in the southwestern part of Alaska, it has a width of 180 meters and a length of 250 meters. It is also home to 25 local tribes that are recognized by the federal government. The watershed is home to 29 fish species, 190 bird species, and over 40 land animals. It is hard to access, but its remote location just adds to its allure for anglers. A lot of rivers meet at Bristol Bay, which makes it an attractive spot for Alaska fishing.

As another popular destination for fishing in Alaska, Bristol Bay is popular for its salmon runs. This is also one of the best spots to try rainbow trout fishing. During salmon’s spawning season, the rainbow trout feasts on salmon eggs, making them large. 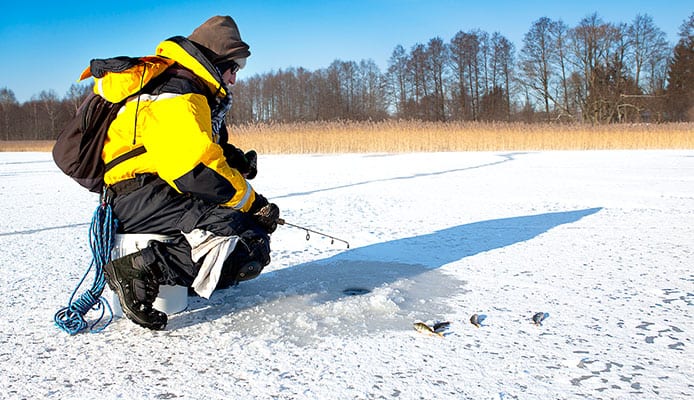 This is another remote island that you can reach only by boat or plane. It is known for its population of Kodiak bears, so always protect yourself before you go to stay safe and sound. A verdant landscape makes it a stunning destination for nature lovers.

Fishing is one of the best activities to enjoy during your stay on Kodiak Island. It is a popular spot for a king salmon. However, the true star of the show on this island is Coho salmon. It may not be as big as the kings, but it is known for being a good fighter and a challenging catch. It is no longer surprising that the Coho can break your fishing rod and reel. During the spawning season, it is not hard to spot Coho salmons in groups.

If it is steelhead that you would like to catch, this is one of the best places to check out for Alaska fishing. There is a huge steelhead community in this area, which proves how this fish is its most popular catch. It is not uncommon to find a steelhead that weighs as much as 30 pounds. They tend to fight a lot, so be prepared!

If you are not into steelheads, however, you should not dismiss this place that easily. It is also known for its huge population of rainbow trout.

The best time to go fishing in Southeast Alaska is during the start of spring, a time when the water in the rest of Alaska is frozen.

This river in the Arctic region has an approximate length of 280 miles. It is known for being an Alaska fishing destination where you can find shellfish. Many of you might not even recognize Kobuk. Well, that is because it isn’t a popular fish to catch outside of Alaska.

The shellfish isn’t as heavy and not much of a fighter as a pike, but it can still be considered as a trophy catch. In fact, they can easily reach 30 to 40 pounds, so you might need to use a little effort to make sure that you hook the fish successfully.

One of the best things about choosing to fish in the Kobuk River is its accessibility. Some roads will make it easy to access, but you can also charter a boat or flight if you want convenience.

The name might easily put some people off. You might be wondering why we have included this in our list of the best places for fishing in Alaska. The highway has a length of 135 miles and provides access to Denali National Park, making it a favorite for hikers. More than the stunning scenery, it has a generous water system that serves as home to several fish species.

It is one of the best places to use your fly fishing rods. Small lakes, rivers, and streams are found along the stretch of the highway. The shallow waters are known for the presence of Arctic grayling.

Birch Lake is known as a recreation site in Fairbanks, so you can expect plenty of ways to have fun, including kayaking. If there is one good reason to visit, however, it is to try ice fishing. So get your ice fishing boots and other gear ready! Learn how to set up ice fishing shelters and enjoy a multi-day trip. Alternatively, you can also check the lodging options.

This lake is home to Coho salmon, Chinook salmon, and rainbow trout. They are known to bite easily on baits and lures, making it a great option for fishing in Alaska even if you are a novice angler.

If you plan to go here for ice fishing, the best time to visit is from late November to mid-January.

Formerly called Kepler-Bradley, this is a state recreation area that is popular for outdoor activities, including biking, hiking, and fishing. It is easier to access compared to most of the places we have mentioned above. It is just a short drive from Anchorage.

This lake was first stocked with rainbow trout in 1992. Today, it is known for its population of not only rainbow trout, but also Chinook salmon, Coho salmon, and arctic char.

It also draws people who are interested to try ice fishing. This does not have to be complicated since you can do it even without the need to bring complicated gears. Aside from ice fishing lures, lines, reels, and rods, don’t forget ice fishing fish finders to easily locate your next target.

It is no longer surprising that Alaska is often on the bucket list of many anglers, both novices, and pros. Fishing in Alaska is an exciting activity with plenty of opportunities to catch different species, including king salmons and enormous halibuts. It may have a remote location, but it is worth the trip if you want a different kind of fishing experience. 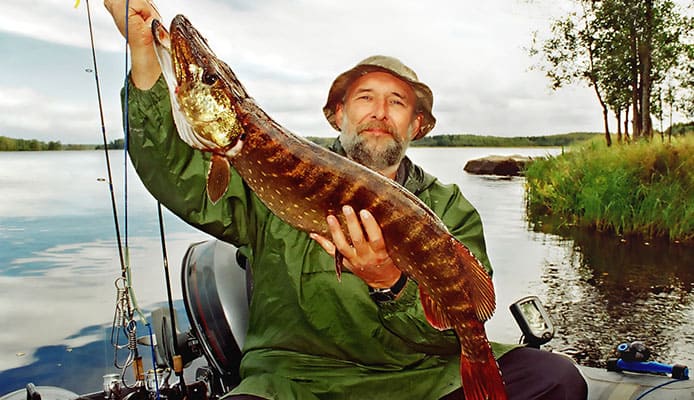 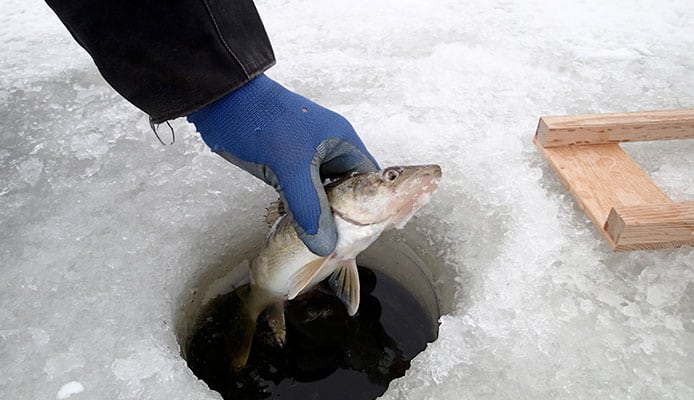 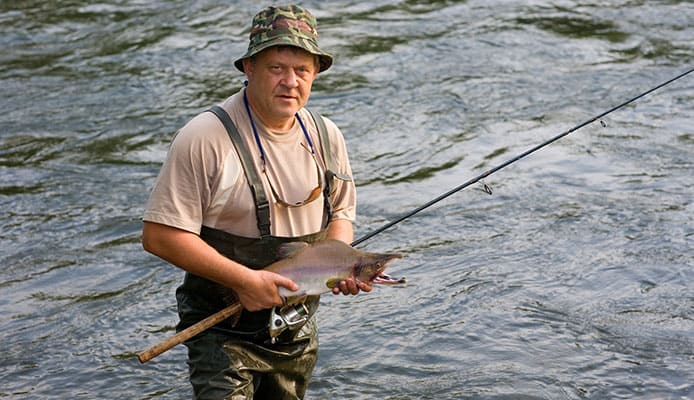