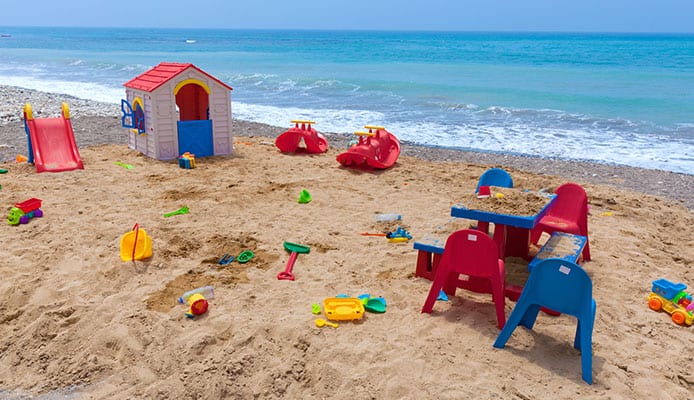 Spending a day at the beach can be made so much more enjoyable with a few beach toys and games that encourage play and bonding. If you’re looking for something to do at the beach aside from swimming or getting a tan, here’s a list of different beach games with toys and floaties that will provide you with hours of fun and entertainment.

Skeeball is a classic arcade game that many adults are sure to remember. For those who aren’t familiar with this game, it is pretty similar to bowling but instead of knocking down pins, the aim is to get the ball to fall into a hole. That said, all you need for this game are a few tennis balls.

First, you’ll need to build a ‘lane’ by creating a smooth surface with two gutters on each side like an actual bowling lane. At the end of the ‘lane’, you can either dig a couple of holes or build a mound or a ramp with holes in them. By the way, you’ll want to build a wall a few feet away from the holes. This will keep the ball from rolling down the beach after each turn. Otherwise, you may end up chasing the ball into the water after every turn which will then make the game less fun. Then, assign a point to each hole with the more difficult holes (the ones at the back) getting more points than the easier ones.

From then it’s game on! Players take turns rolling their balls and shooting them into the hole, and the player with the most points after ten turns wins the game.

Ring toss is a fairly simple game: throw rings or hoops and try to get them over a post. You can make your own posts and hoops using pool noodles, or you can buy a ring toss set from your nearest toy store or online.

To make the game more challenging, you can position different posts in the sand and assign points to each post, with the farthest post having the highest points and the nearest post having the least points. The player or team who can get the most points after a round wins the game.

Beach volleyball can be a fun game and great exercise at the same time. Some beachgoers like to follow the official rules and format while playing, but you can make the game more casual by removing some of the rules.

Many beaches have their own dedicated beach volleyball courts which are open for public use. But if the courts are taken or if there’s none on the beach you’re visiting, then you can make your own. All you need is a net and two poles which you can buy from most sporting goods stores.

This is another fun beach game for kids and adults, and it doesn’t take much play this game. All you need are two buckets and several plastic cups. To play the game:

Sand darts are mostly popular among kids, especially the younger ones. To play the game, you first need to draw a large circle in the sand with several more circles inside it. Then assign points to each circle, with the middle circle having the most points and the outermost circle having the least.

Each player or team has three chances to ‘throw’ pebbles or shells onto the circle and trying to get as close to the center as possible. After three throws, the points are tallied and the next player or team starts their turn. The player or team with the highest number of points wins the game.

This beach game is played best if there is a slope leading to the water. You will need several pool noodle boats and a plastic cup for each player or team member. To get started, you first need to dig a channel (it doesn’t have to be a straight line) from the starting point leading to the water’s edge. The longer the channel (and the more turns or curves there are) the more enjoyable the game will be.

The team then sets their pool noodle boats at the starting point of the channel. At the ‘Go!’ signal, the players run to the water’s edge, fill their cups with water and then dump water into the channel so that the boat moves down to the finish line. The first team to get their boat to the finish line wins the game. 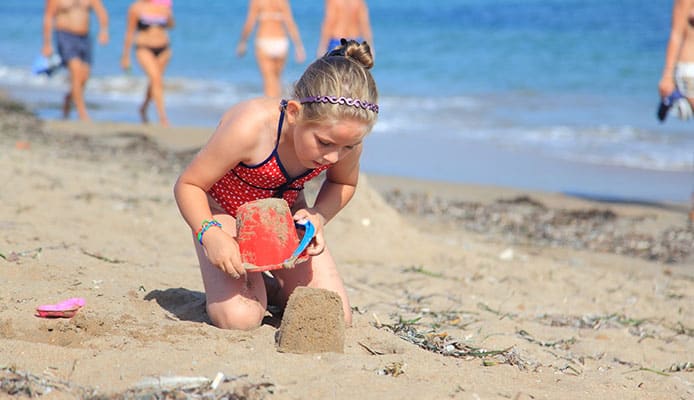 For this game, you’ll need one beach ball for each team and several squirt guns depending on how many players there are in a team. You’ll also need to create a ‘lane’ for each team. You’ll want to make walls between the lanes to keep the beach ball from crossing over to the other lanes. Then place the beach ball in the lane and at the ‘Go!’ signal, the players will start shooting the beach ball and get it to move towards the finish line. They can run to the water’s edge and refill their guns if they run out of ‘ammo’. The first player or team to get their beach ball across the finish line wins the game.

Here’s another fun game you can play with a beach ball. First, you’ll need to designate a starting point and a U-turn point which you can mark with a pole or a flag. Then, divide the group into equal teams, have them line up at the starting line, and give each team a beach ball.

This is quite similar to beach ball relay, but instead of moving the ball solo, the players will have to do it as a pair.

So first, divide the group into two equal teams. At the ‘Go!’ signal, the first pair for each team balances the beach ball tucked between their heads or pressed between their backs or stomachs. Then they move together and carry the ball towards the U-turn point, after which they make a U-turn and head back to the starting line where the next pair for their team awaits. As with beach ball relay, the first team to complete the challenge wins.

Beer pong is commonly played by college kids in clubs or dorms, but you can actually play this game at the beach even without a beer pong table or beer. And because there’s no alcohol involved, even kids can play this game, too.

First, you’ll need to dig two sets of beer pong (or in this case sand beer pong) holes opposite to each other. Then, using the tennis balls you used in the beach skeeball game (or bean bags if you have some), each player or team takes turns at tossing the balls or bags into the opponent’s holes. The first player or team to fill all the opponent’s holes wins the game.

Polish horseshoe is another popular beach game, though it is mostly played by adults since the original version requires that they hold a beer bottle throughout the game. The original version also has more technical rules which are too difficult for very young children to grasp, so to get the kids involved, we have here a more kid-friendly version, and yes, there’s no need for beer in this version.

First, you’ll need to set up the polish horseshoe poles and bottles which you can buy as a set in most toy stores. Jam the poles about 15-20 feet away from each other and then place the bottle on top of the poles.

This is a simple yet fun game that many kids will definitely enjoy playing. To start, you’ll need at least 20 cans and two or more sponge balls.

Now for the cans. Simply stack the cans into a pyramid across each other, one pyramid for each team or player. You may want to fill the can with water halfway so that the wind doesn’t blow them. It will also help to prevent the cans from flying around when they’re hit.

The players will then take turns throwing the sponge balls soaked in water into their opponent’s pyramid. The first player to knock off all the cans in their opponents’ pyramid wins the game.

One game you can play after you’re tired of beach volleyball is beach bowling.

First, you need to make a ‘lane’ by smoothing out a length of the sand and creating gutters on its side like an actual bowling lane. Then you can mold bowling pins out of the sand and use the volleyball as your bowling ball. Simply roll the ball and watch the pins explode as the ball hits them. The team or player who breaks the most number of pins wins the game.

Spikeball is an exciting game that has become a competitive sport. If you want to play it for competition, you can go online and search for the game mechanics and the rules. But if you just want to play it for fun and don’t want to bother yourself with the scoring rules, then you can play a simpler version. It’s pretty much like volleyball, but instead of spiking it over a net, you spike it onto the trampoline.

Playing fun beach games with toys and floaties can help your family and friends make the most of summer vacation. With these games, a simple day at the beach can turn into a fun and perfect opportunity for bonding. 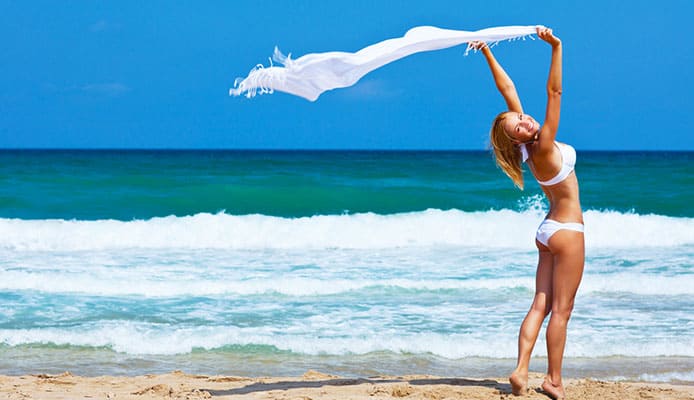 How To Get Rid Of Razor Bumps 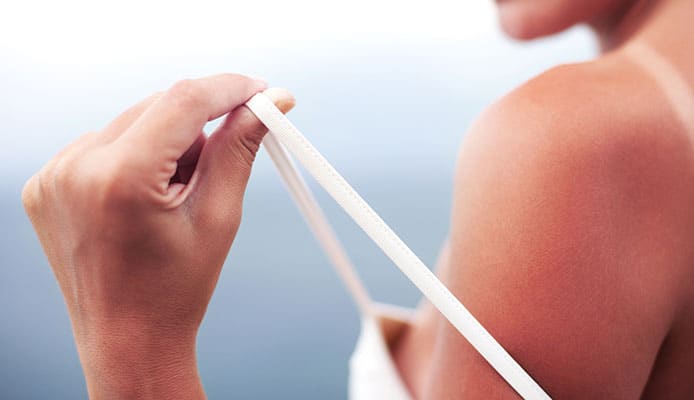 How To Make A Sunburn Go Away Faster? 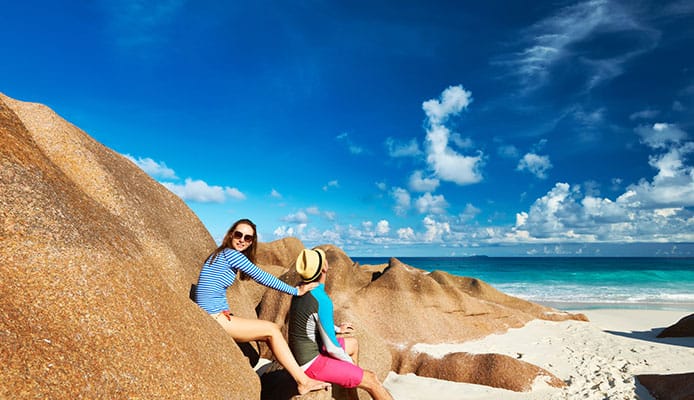